Fades are the number 1 ranked trendiest men’s hair cut out! Voted by brands like Vogue, Cosmopolitan and Harpers Bazar in 2021.

We believe fades are so trendy because they are easily added to any type, length, or style of men’s haircut. Fades are also a great looking, low maintenance cut, not counting barber visits for upkeep.

Here are a few different styles and cuts of fades.

“Skin fades” are the cuts that begin almost right down to the skin at the back of the neck and commonly be seen with an ultra-short skin or #0 fade on the back and sides, with anywhere from a #1 to a #5 on top.

Skin fade can be considered the most popular due to the contrast of shaved sides and a full head of hair is instantly attention-grabbing. This style has been made popular with l models such as Ricki Hall bringing it to the fore in fashion. 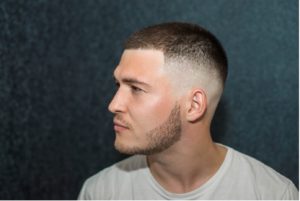 A Shadow Fade is any haircut that starts lighter on the sides and blends into longer hair on top.

This style is sooooo trend because it is so diverse it can blend low, medium, or high. You can also choose to keep the length on the sides light, medium, or dark. The hair on top can also be any length just if it is longer than the sides. 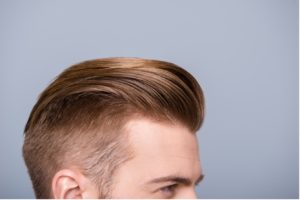 Temple fade cool look with a temp fade between the sideburns and beard and a quick fade at the neckline. The areas with shorter hair make other hairs appear fuller in contrast.

Temple fade is a stylish way to achieve a younger look, seeing as the ability to grow a full beard up to the temples is seldom found in men younger than 24, jump on this trend with celebs like Michael b Jorden who rock this look. 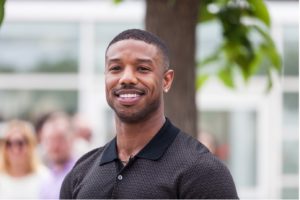 The burst fade is a semicircle that leaves length at the back of the neck. Like any other fade or undercut, the burst fade can be added to any men’s hairstyle, short or long. 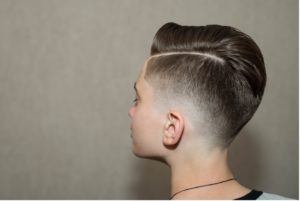 A traditional buzz cut is an all-over fade of the same length normally no longer than a 1.

If you have an elongated or oblong face shape, the buzz look makes it look more masculine and adds some width to it. 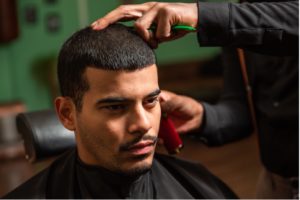 The taper fade is a quick fade at the sideburns and neckline. Those areas blend right into the skin from your haircut of choice and will grow back looking clean and natural.

A taper fade is a trendy choice for men with Afro hair. It’s less high maintenance than a full Afro and helps frame your face, making your features look sharper. 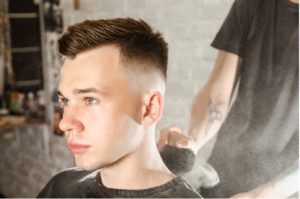 An undercut fade is a men’s haircut that features a mid to high blurry fade, with hair that’s medium to long on top and short on the sides.

The strong appeal to the undercut fade is the way it looks effortlessly cool, it does not need a lot of time, not to mention the one and only brad pit rocked this cut as a staple for many years. 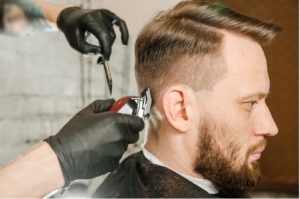 The pompadour fade haircut is a men’s haircut that combines the classic pompadour with a taper fade.

It is a hairstyle with a lot of volume on the top and can be styled by slicing it back or leaving it to lose. The pompadour fade is generally very neat and Classie style 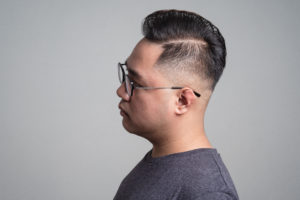 A low bald fade is a type of fade that starts at skin level and increases in length shortly above the ear as it goes to the top.

Next time you go to the barber say “I want a temple fade with a line in the back, but I want to keep it longer on the top” is the best way to describe a low bald fade. 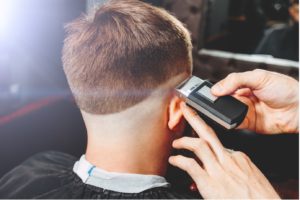 Box fade is the back and the sides of the hair are faded. Then, the top portion is shaped into the “box”.

It’s commonly known as the Fresh Prince of Belair cut, why? because you guessed it the popular Will Smith owned this hairstyle through the 90s and is the reason why it is so popular. 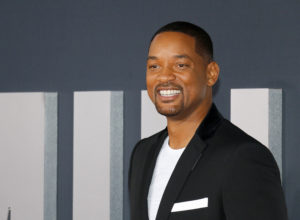 The high fade usually follows a line that goes straight back from the corner of the forehead.

The high fade is very dramatic as it gets rid of quite a lot of hair however, they look excellent for men with curly hair as it creates a contrast to compliment the style. 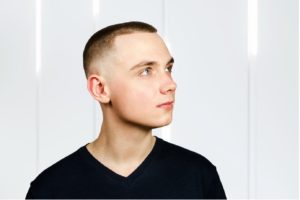 A very mature fade that is very light and smooth, you will mostly see this fade paired with bread which is where the maturity of the look comes from and there is no denying that sideburns can make a man look very attractive. 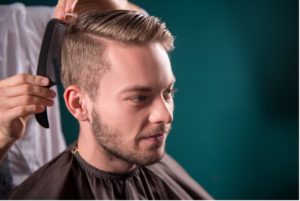 The long hair fade is generically designed for men with very thick long hair that want it to be more manageable and thinned out however it is also a very trending style when tied into a ponytail to display the fade underneath, it’s the perfect way to rock both short and long hair with style 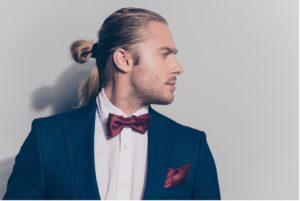 Did you find this helpful? learn something new or just feeling inspired? Check out our other blogs we think you will like below:

Men Haircuts, what are they?

Men’s haircuts are the various ways that men’s hair is cut, chopped off that includes using scissors over comb techniques, clippers, open razors, thinning shears, and yes even flames (not recommended).

Men’s hairstyles, what are they?

Men’s hairstyles can be described as a combination of haircut types, techniques on different hair lengths such as short, medium, and long hair. The basis of any men’s hair style is the way the hair is cut, textured, tapered, sliced, chipped, followed by how it is styled and groomed using styling utensils and haircare products. A men’s hairstyle follows a men’s haircut.

Short Haircuts for men, are they fashionable atm?

Most definitely, men’s short haircuts are very much in vogue at the moment, and you can safely say always will be. This is because men find short haircuts easier to manage, keep clean, and to keep looking groomed most of the day. There are varying degrees of short men’s hairstyles from very short all over crops, through to men’s tapers, and fades where the hair is longer on the top. Short men’s haircuts can be personalised and will always be fashionable.

What are the best Short Hairstyles for men?

The best short men’s hairstyle are the ones that suit hair types, face shapes, jobs and lifestyles. For example, a guy that has very curly, fuzzy hair and that works outside will probably want a haircut that is short all over to control the curls and keep his hair off his face and out of his eyes and keep him cooler. Whereas, a guy with the same hair type that works inside an office may opt for a longer top section so that he can mould into different shapes and styles each day.

Long hairstyles for men, are they trending atm?

We are seeing more men growing their hair longer in the past few years as a trend for sure, noting that long hair symbolizes confidence, health, strength and a free rebellious spirit.

Men with long Hairstyles have been around forever throughout history and within all cultures, dating back to our prehistoric ancestors, and then spanning across royalty, religions, spiritual and community leaders, through to modern day Roc Stars, Male Celebrities, Hipsters, and office professionals.

Long hairstyles for men and fashionable, versatile, more accepted than ever before, and so for these and many other reasons are trending right now.

Fade haircut, are there different types of Fades?

There are different types of fade haircuts for men, all determined on how low and how high the actual fade is, the direction across the sides into the back, where it begins, and also how short it begins.

Here are six examples of fade haircuts for men.

Taper Fade, are they on trend atm?

Taper Fades haircuts for men are very much on trend right now. The taper part is really the weight line, or where the hair starts to get a little longer. This provides the illusion horizontal (High, Medium, and Low Fades) or vertical (Burst Fades, and Drop Fades) forms that will suit various face shapes, head types. (long or wide).

Skin Fade is this for everybody?

Skin Fades can be for everybody, it really only depends on how high you choose to go from the neck and above the ears. The higher the more dramatic. Sometimes how high skin fades are tapered up will be determined by if the wearer has any scars or other skin related issues, so be sure to consider this before getting a high skin fade done.

Men’s fade, what are the benefits?

The benefits of a men’s fade haircut are that

Man bun, what are the benefits?

The Man Bun is quite simply long hair for men that is pulled back at the sides and then up from the neck, through a hairband into a knot. One hand pulls the hair up and off the face, while the other places the hairband around it, and then twists the remaining hair around the hairband, secured by the same or a new hairband.

Benefits of a man bun are numerous and includes

Name some types of men’s haircuts?

Men’s haircuts have been given names over the years, so that people can easily recognise and ask for them. Some men’s haircut names include:

What makes a men’s haircut famous? It all starts somewhere and more often than not a male influencer such as a rock star, celebrity, sports star, athlete, anybody famous really will sport a particular haircut and before you know it, this is copied by the masses. The haircut may already exist, however it’s their star quality, influence, and any customised changes that makes it a worldwide trend.

Some more recent examples of famous men’s haircuts include: